skip to main | skip to sidebar

Replacing Knock/Ping Sensors on a 95 BMW 525i

There really isn't much in Bentley's about how to replace the ping sensors, or even where they are located. I searched and searched the bimmerforums and could only find a few references to them. The thing that helped me the most was a picture I found somewhere of a M50 motor out of a car and a guy made a reference to a couple of spots on the side of the block where the sensors would be located if they were on there. Below is the picture I'm referring to and I've enhanced it by drawing arrows exactly where the sensors go (click on the picture to enlarge). 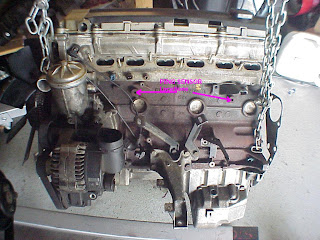 Then I started talking to few guys on Bimmerforums who gave me a little bit more information and they told me that to get to the sensors, I'd have to remove the intake manifold. One guy even said that it wasn't any big job, that I could have the manifold off in 20 minutes. So, I figured what the heck. I read up on how to take the manifold off in Bentley's and waited for the parts to arrive. I had only received a fault code for the 4-6 cylinders sensor, but decided while I'm in there, I might as well replace both of them, so I ordered another one. The parts finally arrived and I went to work. For the most part, the Bentley's manual is pretty good at leading you down the right path. I took my time and made sure I didn't break anything that I'd have to replace to get it back in service. The procedure I followed was in section 113-4 of Bentley's starting at step #5 (I wasn't removing the head, so I didn't drain the cooling system. Removing some of the coolant hoses caused a few drips, but I barely lost any coolant at all) and going through step #18. I wasn't in any hurry and I think it took me about an hour to get it apart. In Figure #15 of Bentley's, pay particular attention to the two manifold support bracket bolts, somehow I over looked them and couldn't figure out why the manifold wouldn't come out. In Figure #13, the idle air hose is a royal pain to get out. I tried to release that retaining clip for at least 15 minutes before I accidentally broke it while trying to remove it (I put it back together with the broken clip, there is a lot of force against it, so I doubt if it will move out of place).The following picture shows the location of the sensors once you have the intake manifold out of the way. As you can see, there is still a bunch of stuff in the way. The red arrows show the sensor locations. The green show bolts that anchor racks that hold all of the wiring that travels along the block. You need to remove them to be able to get access to the sensors. You'll be able to see the far right bolt better in a following picture. 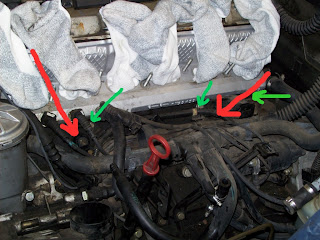 This next picture is a close up of the front ping sensor. This one wasn't throwing a code. 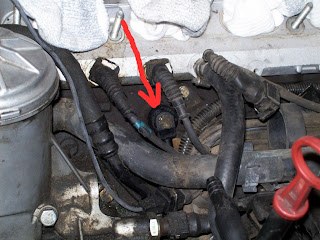 This picture shows a close up of the rear sensor, you can barely see it behind the wiring (click on the picture to enlarge) you can also see the top of the other bolt you need to remove to move the wiring rack out of the way. 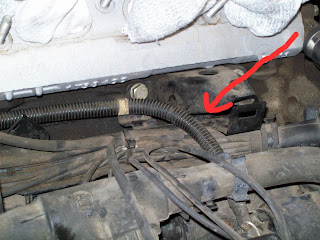 Here are the sensors out of the car. The one on the left is the front one, it disintegrated as I was removing it. It didn't appear to be cracked before I started to take it out. The rear sensor (right) didn't disintegrate like the other, but it was cracked before I removed it. Probably why it was giving a fault code. 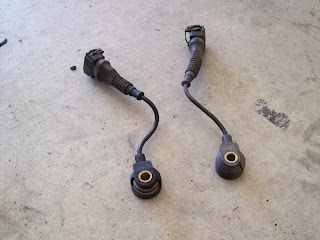 While I had everything apart, I went ahead and cleaned the ICV. That thing was filthy. I also cleaned the MAF and the throttle body and just did some general clean up under the intake manifold. Putting it back together was basically the reverse of removing it all. The only thing that I would recommend is to get the two intake manifold support bolts started before you put any nuts on the intake manifold studs. The rear support bolt was a bear to get started, I ended up having to loosen up everything else to get things to line up. Other than that, everything went back together fairly easy. This job took me about 6 hours to complete. I had to run to the parts store to get some small hose clamps for the fuel lines. I also had to take care of a couple of other minor honey do's while I was working, so total time working was about 4 hours.

Good luck if you try this, I figure if I can do it, anyone can.

Cool, now all I need to know is how to add them to an M30 (along with a turbo, intercooler) and configure them to work with my Megasquirt. (At present this seems to be requiring a sacrifice; a few M50s to see where the limits lie ;)) There must be a better way...48

I've discovered over time that when you use "Google", "Bing", "Yahoo", etc. you sometimes aren't directed to the correct blog post you may be looking for.

If you scroll down the page to my "Blog Archives", you should be able to find what you were brought here for.

Welcome to my Blog!

Almost Gone
CA, United States
Thanks for stopping by. I am by no means a professional mechanic, but I do enjoy getting a job done right. I'm putting my car adventures down in written word here. If you are stopping by looking for some information about your problem and don't find what you're looking for, leave me a comment or email me (just click on "View My Complete Profile" below and there will be a link to my email there) and I'll be glad to tell you what I know. I'm having a great time working on these cars, even though it is sometimes frustrating. One last thing, if something I wrote down here helped you out, leave me a comment. That way I know to keep on jotting down my project notes. Thanks!